In AAPL daily chart (below), we put the initial stop under the nearest support relative to the entry point (trigger). Then we were moving the stop below the nearest support as price was advancing in order to protect profits. But in reality this isn’t so simple. If there aren’t any supports in the daily chart as the stock advances, we have to use another criterion to manage the stop, maybe a moving average or the supports on a smaller time frame (i.e. the 1 hour chart).

After the breakout, USB daily chart (below) is rising rapidly without forming supports to place a stop. We don’t want to risk a big portion of our profits. What can we do?

We can define strong supports from the 1 hour chart of USB and accordingly move the stop.

In ORCL daily chart (below), we entered long using reversal strategy, at the green circled candlestick and placed the stop below the support at $24.75. As long as the stock was moving upwards we were transferring the stop progressively at points 1, 2, 3, 4 to protect our profits.

In CTRP daily chart (below), we entered short at the green circled candlestick and we placed the initial stop above resistance.

As the price was declining there were no distinctive resistances to transfer the stop. In that case a shorter time frame can be helpful. So, we opened again the 1 hour chart and found clear resistances at points 1, 2, 3 (below). At the circled point 4, price hit the stop and the position automatically closed on profit. 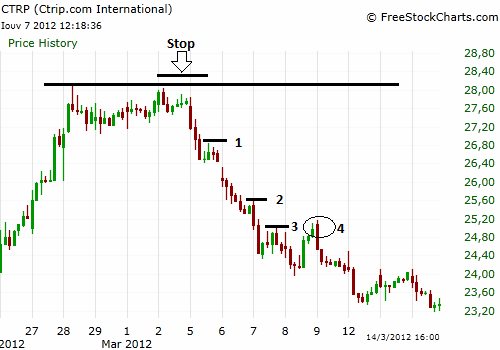